Current methods for experimenting with ecosystems are subject to artifacts, distortions and shortcomings. In ExpeER, improved CO2 and temperature control techniques, and new experimental approaches including ecosystem miniaturisation were designed and tested. The aim was to create a new generation of experiments that were both more realistic and more generalisable, especially towards a better understanding of global change impacts.
Picture: Thermal image of a test-plot warmed by infrared heaters.©H. De Boeck

We analysed and quantified artifacts associated with infrared heating of vegetation patches in free air conditions, both regarding the way of supplying the heating and the possible convolution with drying effects as heating may provoke drought. The analysis demonstrated, among others, that the artifact of excess water loss which is associated with infrared heating turns into a benefit when simulating heatwaves, as water loss during heatwaves is enhanced by naturally occurring lower relative humidity (De Boeck et al. 2012a). In 2014, a new infrared irradiation system will be tested. The system has the geometric design developed by Kimball (2005), but is equipped with a novel control system in order to supply the infrared radiation in a way that the natural regulation of leaf temperature by the plant's transpi-ration, is not distorted or overruled (De Boeck and

Nijs 2011).
As many studies use enclosures to increasetemperatures either passively or actively, we also studied artifacts associated with such setups and suggested workarounds to solve or minimize them. An important finding here is that passive open-top chambers enhance leaf temperatures more than suggested by air temperature increments (De Boeck, De Grootte & Nijs 2012b), owing to lower wind speeds in such enclosures compared with outside. We therefore recommend that studies using open-top chambers should always record leaf or canopy temperature. A similar analysis for greenhouses, on the other hand, revealed no such leaf temperature artifacts provided that wind speeds inside the greenhouse are high enough. At lower wind speeds than outside, corrective climate-control algorithms would still be required. Yet it seems easier to construct enclosures with realistic wind speeds that remove the need for such corrections.
In the Montpellier Ecotron, problems with simulating other than local climates have been identified and quantified. Decoupling temperatures in Ecotrons from outside conditions can be achieved through corrective climate-control or shading, but the proper regulation of soil temperature remains a challenge and requires further study. In the Imperial College Ecotron, the use of weather station data to emulate changing field conditions in ecotrons was explored. Here the existing control system was succesfully adjusted to realistically mimick microclimate variation in the field.
Finally, we investigated artifacts from excavating, translocating and re-installing large soil cores in lysimeters, a technique frequently used in climate change studies. Differences between soil temperatures in the lysimeters and soil temperatures in the natural environment can arise from the air surrounding the lysimeters. Such artifacts were quantified, and solutions  to minimise them tested.

Given the limited spatial scale and high running cost of current FACE Systems (Free Air CO2 Enrichment), we use CFD to simulate improved designs of CO2 release systems on the computer. These designs will be tested in a central facility deployed in Northern Italy. Currently this facility consists of octagonal FACE rings with a newly developed control system (see pictures). This next-generation FACE system will be operated over the following two years for extensive testing and fine-tuning.
Our most recent CFD simulations demonstrate that relatively stable spatial CO2 gradients might be created in changing wind conditions by using arrays of CO2 emission points instead of classical ring-based designs. This opens perspectives for creating a range of CO2 levels within the same experimental unit.

Physical models of the earth have been built to study the global carbon cycle on a minituarized scale. Analyses are focusing on the disparity between these prototypes and the parameters of earth system models, and problems related to the addition of an artificial ocean are being explored. 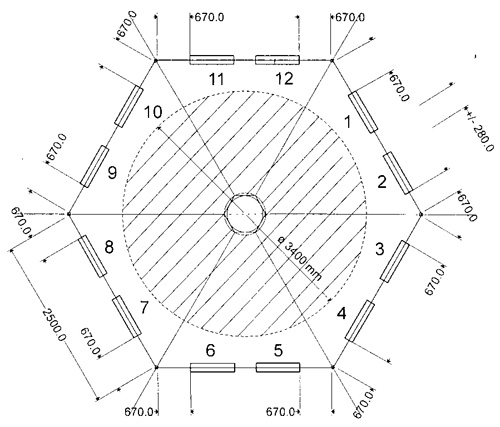 This task aims at an improved understanding of biodiversity dynamics in response to disturbance and climate change and its consequences for ecosystem processes, by designing experimental approaches that are more realistic and more generalisable than past attempts. As a first step we produced a report on weaknesses and limitations of current techniques/approaches to study ecosystems in future, which is now available. In a second step, two separate research efforts are undertaken. One addresses abiotic and environmental drivers in manipulation studies, and one the other focuses on biotic manipulation. Both include a workshop and the production of a synthesis/perspectives paper. Author groups for these papers have been assembled and writing is currently in progress.
Picture: Infrared heating prototype diagram.