Upscaling tools using model-data fusion approaches were developed to assess the potential of the ExpeER infrastructure to upscale ecosystem responses to environmental changes and to develop new monitoring strategies.
Two research groups (from CNRS, France and Forschungszentrum Jülich, Germany) centred their activities on upscaling of biogeochemical fluxes (water, CO2 and N2O). Philippe Peylin and co-workers at CNRS used a variational data assimilation approach in combination with ORCHIDEE to upscale the mentioned fluxes from individual flux towers to the continental scale. This allows an improved estimate of water and carbon balances of entire continents. The research group in Jülich developed a sequential data assimilation approach in combination with CLM to upscale the fluxes to the regional scale, making use of different types of information like flux measurements and remote sensing information. The University of Helsinki team deduced relevant information (like fPAR) from remote sensing images, which can be used to improve estimates of large-scale water, CO2 and N2O fluxes. Two research groups (from the University of Leeds, UK and Umweltforschungszentrum - UFZ -  Leipzig, Germany) dedicated their research in this project to the upscaling of biodiversity, with a focus on detecting relations between biodiversity and ecosystem functioning. This was done by searching for correlations in the scaling of biodiversity and the scaling of properties like soil moisture content, carbon stocks and (probably) water quality. In order to understand the relations between upscaling of biogeochemical fluxes and biodiversity, three of the four research groups (CNRS, Jülich and University of Leeds) also analysed the TERENO-site of Rollesbroich in the region of North-Rhine Westphalia, Germany. The Rollesbroich site was also analysed by different models (LPJ-GUESS, Coup, Jules) which were used by groups in WP9. The application of such a large number of models on a site, allowed a better understanding of errors, which were made when effective parameters and simplified model dynamics were used to represent processes in larger scale models. The last step in this activity consisted of making recommendations for improving the infrastructure to monitor ecosystem processes. Showing that some type of measurements are more useful to constrain predictions, whereas other data types are less useful, has value when designing a monito-ring network for ecosystem processes and the variables which are measured there.

WP10 organised three workshops, the first in Jülich (November 2011), a second one close to Stockholm (September 2012) and a third one close to Helsinki (October 2013). The last two workshops were joint work-shops with WP9. These workshops focused on the coordination of the work in WP10 to achieve the goals set for WP10.
Particular issues addressed were:

Both Jülich and CNRS worked on the development of upscaling frameworks of water, energy and carbon using two different global land surface models (CLM and ORCHIDEE). Jülich developed an upscaling framework (Ensemble Kalman Filter inclu-ding parameter estimation) and worked on the implementation of it in combination with CLM. Measurements of net eco-system exchange and latent heat flux by eddy covariance towers were assimilated to improve predictions with land surface models. Leaf Area Index data from MODIS were assimilated to further improve the parameterisation of the land surface models. Leaf area index data from MODIS were assimilated to further improve the parameterisation of the land surface model. CNRS finished the implementation of a variational data assimilation framework in combination with the land surface model ORCHIDEE and tested it for various European sites with eddy covariance flux towers. CNRS found that using more than 70 FluxNet sites worldwide to optimise critical model parameters significantly improved the model performances (estimated with inde-pendent atmospheric CO2 data for instance) and led to large changes in the future prediction of land carbon fluxes.
Julich, CNRS and project partners from WP9 compared several land surface models for the TERENO-site Rollesbroich. Julich applied CLM, CNRS made simulations with ORCHIDEE, and the project partners from WP9 made model runs for this site with the Coup model, LPJ-GUESS and Jules. The model performances were analysed using two years of observations: sensible heat fluxes were slightly overestimated and latent heat fluxes slightly underestimated. The interannual variability was stronger in the models than in reality, indicating potential weaknesses in terms of soil moisture /temperature control on photosynthesis and/or respiration. The model comparison was extended further, making use of the unique data collection at this site which includes a dense soil moisture and soil temperature observation network, many measurements in respiration chambers and evaluation of carbon stocks. This allowed for detailed model evaluation and increased insight into the reasons for differences in performance between models.
For upscaling of fluxes with a data assimilation approach, it is important to assess the measurement uncertainty of fluxes accurately. Therefore, Julich developed an improved procedure to estimate random errors of carbon fluxes measured by the eddy covariance method and tested it at the TERENO-site Rollesbroich. This new ap-proach took into account that simultaneous measurements made by two eddy covariance towers do not only differ because of random measurement errors, but also because of systematic differences in conditions between the sites. The systematic differences were found to be scale dependent. We found that more realistic estimates of the random error were obtained with the new, improved procedure.
UHEL tested an approach to estimate gross primary production (GPP) on the basis of the photochemical reflectance index (PRI) derived from MODIS. UHEL found that correlation between PRI and light use efficiency (needed to calculate GPP) was high at the leaf level, but unfortunately not at the level of eddy covariance flux tower.
University of Leeds also investigated the distribution of ecological infrastructure in Europe. The ExpeER sites are concentrated in Western and Central Europe, with fewer sites in Alpine, Boreal, Steppic and Pannonian regions. Forest sites are the most numerous, followed by grassland and agri-cultural. In biogeographic terms, the best way of adding value to the ExpeER network will be to introduce infrastructures in Eastern Europe, especially in the Boreal and Steppic zones that have a large surface area in Europe, but low representation within ExpeER.

Two frameworks for upscaling of bio-diversity were developed and are already implemented: a sampling-based statistical approach (Leeds) and an approach based on wavelet analysis (UFZ). The sampling-based statistical approach for upscaling of bio-diversity was tested for experimental TERENO-sites in the Eifel and Harz (inclu-ding biodiversity sampling campaigns) and related to the upscaling of other hydrological and biogeochemical state variables. First analyses indicate that the upscaling of biodiversity for the Eifel TERENO-site shows little relation with the upscaling of hydrology, and is more strongly governed by difference in land use (e.g. different kinds of farming and agricultural intensity).
For the Harz TERENO-site, an extensively used grassland, biodiversity showed a stronger link with the scaling of hydrological variables. We produced species-area curves for the two study sites. They range from 0.01m2 to 1000m2 in quadrats, and then to the whole catchments. They show the influence of land ownership (Julich) and land management and topography (UFZ) on species-area relationships.
Finally, we linked results for upscaling of biogeochemical fluxes and biodiversity with new monitoring strategies. Uncertainty estimates of the upscaling methods were used directly to estimate data value and the need for additional monitoring stations. 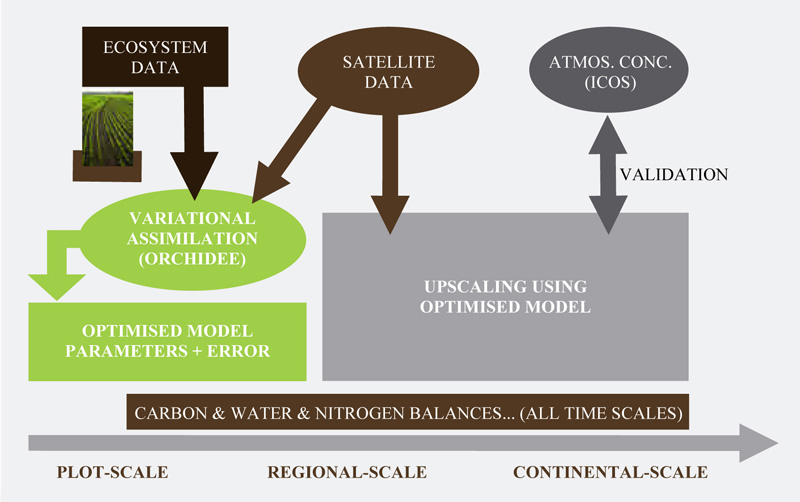