CONTACT: G. ALBERTI (This email address is being protected from spambots. You need JavaScript enabled to view it.) 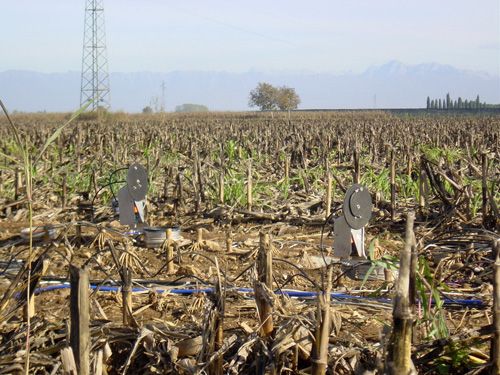 TA User (visit): Amit Kumar Jaiswal, Agriculture Research Organization, Israel (October, 2013 – 11 days).
Project Description: Biochar, the solid high carbon product of biomass pyrolysis, is increasingly examined from scientific and commercial perspectives as a potential soil amendment. Biochar has the potential to change in soil pH, CEC, accumulation of organic C, and nutrient availability for plants. Such changes on the soil property can affect microbial diversity and biomass, and enzyme activities in soil. However, the impact may vary depending on biochar physiochemical properties, the amendment amount and time after the biochar applied (biochar ageing). Because the biochar research is quite young, there are few long-term, on-going biochar field trials that can be useful in this regard. In this respect, the Beano site in Udine, Italy, is quite unique. Biochar produced from wood was applied in 2008 to the Beano site, which had been under irrigated continuous cultivation for many years. The experimental plots (2 treatments: with and without biochar) have been maintained under the maize cultivation continuously since 2008. Thus, the Beano site affords a rare opportunity to explore the changes in soil enzyme activity and total DNA pool that may have resulted from biochar amendment.
The intent is to sample soil from upper 50 cm from the experimental plots and to extract and quantify enzyme activities and total double-stranded deoxyribonucleic acid (dsDNA) in the soil in order to see what impact exposure to biochar has made on a variety of enzyme activities and DNA pool. In particular, both extracellular and intracellular fraction of enzymes and dsDNA will be extracted by improved extraction procedure. The activities of the various enzymes such as arylsulfatase, β-glucosidase, leucine-aminopeptidase, acid- and alkaline phosphatase, will be determined using fluorescent analogues of each enzyme’s substrate on microplates. Similarly, the total dsDNA will be quantified fluorimetrically using PicoGreen® reagent on microplate reader. This work will be done in collaboration with Dr. Flavio Fornasier, Italy. Other analysis such as molecular weight of DNA and its fragment length distribution will be assessed by agarose gel electrophoresis depending on the results. The ultimate goal is to understand the biogeochemical effect of biochar after 5 years of application on nutrient cycles, plant pathogens, and plant growth.
See the feedback

TA User (visit): Ellen Graber, Institute of Soil, Water and Environmental Sciences, The Volcani Center, Agricultural Research Organization, Israel (June, 2013 –7 days).
Project Description: Recent years have seen a world-wide interest in the pyrolysis/biochar vision for renewable energy production, waste treatment, carbon sequestration, and soil fertility improvement. However, because the “Biochar Vision” is quite young, there are few long-term, on-going biochar field trials that can be useful in testing the carbon sequestration and soil fertility improvement parts of the vision. In this respect, the Beano site in Udine, Italy, is quite unique. Biochar produced from wood was applied in 2008 to the Beano site, which had been under irrigated continuous maize cultivation for many years. The experimental plots (2 treatments: with and without biochar) have been maintained under the same cultivation regime continuously since 2008. Thus, the Beano site affords a rare opportunity to explore the coupled changes that biochar and soil have undergone while under continuous cultivation.
The intent is to sample the experimental plots and to characterize the biochar particles and surrounding soil for a variety of chemical and physical characteristics. The original soil and biochar (samples of which have been preserved by the site directors) are also available for comparison. In particular, the various materials will be characterized in terms of organic matter content and chemistry (i.e., humic substances, small organic molecules, redox activity, mineral contents), and micro- and nano-structure (in collaboration with Dr. Stephen Joseph, Australia). Other qualities will also be characterized depending on the results of these tests. The ultimate goal is to understand the chemistry of biochar-soil- interactions 5 years after biochar application, and how these interactions may ultimately influence soil properties and fertility.

Determination of the biological soil quality of biochar fields

TA User (visit): Nele Ameloot, Ghent University, BELGIUM (September, 2012).
Project Description: In Europe several field studies have been set-up to measure the effect of biochar on plant productivity, nutrient dynamics, C sequestration and SOM dynamics, while the soil biological quality of these fields sites has rarely been sampled. We think this is a major knowledge gap, since soil biological parameters are essential to understand the mechanisms underlying the potential of biochar to sequester C, change nutrient dynamics and increase yields.
The objectives of this study are to sample several biochar fields throughout Europe and measure the biological soil quality of these fields. By sampling several fields (including the Beano field sites in Italy), amended with a wide variety of biochar types at different of application rates, established in different soils and with different establishment times, we could infer the effect of biochar on soil biological quality.

TA User (visit): Christopher Poeplau, vTI Institute for Agricultural Climate Research, GERMANY (May, 2011).
Project Description: The main scientific issue addressed in the project is the interaction of biosphere and atmosphere (gas exchange) in the context of greenhouse gas fluxes as influenced by land use and land use change. Land-use change has a major impact on soil organic carbon stocks. The conversion from e.g. grassland or forest to cropland causes a loss of soil organic carbon and is therefore a source of atmospheric CO2. Land use change has a major impact on the carbon balance of the soil and is responsible for 20 % of the human induced CO2 emissions worldwide. The influence of climate and soil conditions, as well as the processes involved in the decomposition of soil organic matter (especially in deeper soil layers), are not yet sufficiently understood. In the past decades, a lot of work has been done on land use change and the influence on soil carbon. However, many open questions concerning the dynamics of soil organic carbon (SOC) still remain. As an important part of a European field campaign, we want to sample different soils in Beano.