FACILITIES: The Jena experiment is one of the world's largest terrestrial biodiversity experiments. It investigates the relationship between plant diversity and ecosystem processes. Plant communities where plant species richness ranges from 1-60 species are established from a species pool of 60 species from Central European Arrhenatherum grasslands, divided into four functional groups. In total, research can be carried out on more than 600 plots. The experimental communities serve as the basis to study ecosystem fluxes of carbon and nutrients. There are continuous measurements of meteorological variables on all large plots as well as monitoring of important components of the C, N and P-cycle.
In addition to the long-term experiments, a set of new experimental plots (138 plots) was established in late 2010/2011, the so called Trait-Based Biodiversity Experiment (TBE). The aim of the TBE is to establish communities with different plant diversity and representing different levels of functional complementarity. In contrast to previous biodiversity experiments, the TBE combines a non-random species loss scenario with an almost orthogonal manipulation of complementarity. The design aims to advance functional diversity research by directly manipulating functional diversity, thereby considering and separating different types of functional traits (spatial resource acquisition traits and temporal resource acquisition traits). This makes it possible to test whether consequences of species loss for a certain function or ecosystem multifunctionality can be predicted from the distribution of species’ traits in the community.

CONTACT: A. EBELING (This email address is being protected from spambots. You need JavaScript enabled to view it.) 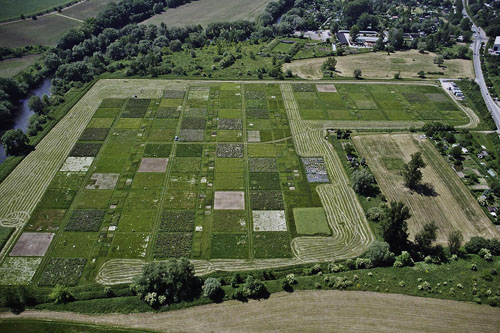 TA User (visit): Heikki Hokkanen, University of Helsinki, Finland (February, 2015 – 05 days)
Project Description: We wish to determine how crop and soil management in agricultural systems affect the natural occurrence in the soil of the most important natural antagonists of crop pests – entomopathogenic fungi and nematodes. These components of functional biodiversity will determine the “suppressiveness” of soils towards pest insects. In our earlier studies (e.g., in the EU-MASTER project) we have shown that conventionally managed arable fields growing annual crops in Europe are practically void of these antagonists, but that different crop and soil management strategies support their existence. We also know that natural, undisturbed habitats such as forests and orchards harbour high levels of activity by these microbial antagonists of crop pests. The objective of this project is to use the existing long-term soil treatment experiments in Europe to determine whether the history of crop and soil management (‘legacy’) influences the diversity and strength of the antagonistic capacity (functional biodiversity) in agricultural fields.

Testing the importance of the optimal canopy nitrogen distribution hypothesis for plant diversity effects in the field.

TA User (visit): Dörte Bachmann ETH Zurich, Dept. of Environmental System Sciences, Institute of Agricultural Sciences, Switzerland (May, 2014 - 5 days).
Project Description: A previous study by Milcu et al. (2014) found evidence for a positive relationship between the functional diversity of leaf nitrogen (N) concentration, carbon (C) uptake and derived efficiency measures. A higher functional diversity of leaf N concentration in the canopy of high compared to low diverse plant communities suggests an optimal vertical distribution of leaf N within the canopy in parallel to the vertical light extinction. This might optimize canopy photosynthesis, and eventually canopy C gain in accordance with the optimal-N-distribution-hypothesis (Anten et al. 1995). However, this assumption requires to be tested directly with field measurements. Therefore, within the planned project we would like to relate leaf N concentrations, canopy light extinction profiles and canopy C uptake measured at different height strata within the canopy to directly test the assumptions of the previous study by Milcu et al. (2014). The measurements will be carried out in plant communities of the Jena Experiment differing in their number of species to test the importance of plant species richness for the assumed relationships. The study will be a collaboration with teams of Germany (Jena, Leipzig, Freiburg) and France (Montpellier) and Switzerland.

TA User (visit): Marcel Ciobanu, Inst. of Biological Research, Dept of Taxonomy & Ecology, Romania (September, 2013).
Project Description: Nematodes represent a major component of soil biota, interacting with other groups of soil fauna through multiple trophic pathways, and their influence on ecosystem processes is well documented. The trophic structure of the nematode community is a reliable index of soil food web structure, particularly in relation to decomposition pathways. Based on these characteristics, an understanding of nematode community responses (as well as those of other groups of soil fauna) to altered precipitation patterns and plant diversity may help predicting ecosystem-level responses to environmental change. The major aim of this study is to investigate interactive effects of drought and plant diversity on soil food web structure and functioning in Central European mesophilic grassland. The project will study how nematode communities respond to experimentally induced summer drought and plant diversity and will explore the possibility of using drought-related changes in nematode fauna as a tool in modelling ecosytem-level responses to climate changes. Soil nematodes will be sampled in selected plots of the Jena Experiment (Germany). They will be extracted using a modified Baermann method and preserved in 4% formaldehyde. The number of extracted nematodes in each sample will be counted and about 150 individuals (if available) will be identified to the genus level and assigned to trophic groups (plant feeders, bacterial feeders, fungal feeders, predators and omnivores). Different ecological indices for nematode communities will then be calculated and interpreted. Multivariate statistical analyses to detect patterns of relationships between nematode fauna, drought and plant diversity will be carried out by using the rich pool of biotic and abiotic explanatory variables available in the Jena Experiment, as well as statistical ecological modelling to investigate ecosytem-level responses to plant diversity and soil water shortage.

TA User (visit): Gerlinde De Deyn, Wageningen University, THE NETHERLANDS (October, 2011).
Project Description: In our project 'Nematodes the molecular way'(NEMACULE) we propose to apply cutting edge techniques for the detection, identification and quantification of soil dwelling nematodes. Specifically we propose to use molecular bar-coding to investigate the abundance and identity of entomopathogenic nematodes in the Jena biodiversity experiment. These nematodes are of particular functional importance because they kill herbivorous insects so that they can provide indirect protection to plants. The great advantage of this novel technique is that key species of nematodes can be detected in large samples of nematode communities because subsampling is not needed (in contrast to morphological analysis). Entomopathogenic nematodes are such key species as they can have large impacts on insect communities despite representing a small fraction of the total soil nematode communities at field scale.
We propose to collect soil samples across the plant species richness gradient in the Jena field experiment. From these we will extract the nematodes and determine the composition of the entomopathogenic nematodes (species and abundance) using DNA bar-coding. Our results will complement the data on insect communities and plant productivity, thereby contributing to the mechanistic understanding of the coupling between biodiversity and ecosystem functioning. Moreover, our project will be one of the first that uses cutting edge techniques for studying nematode communities in the wild. The method is already well established but has not yet been used in the context of biodiversity-ecosystem functioning studies. If our application is successful our study will generate much interest in applying our technique in other studies, for example in other ExpeER sites.