FACILITIES: The Lusignan experiments are a temporary grassland (leys arable crop rotations system) dedicated to study the long-term anthropogenic disturbance on biogeochemical cycles and biodiversity.
The practical scientific questions that need to be answered are:

CONTACT: A. CHABBI (This email address is being protected from spambots. You need JavaScript enabled to view it.) 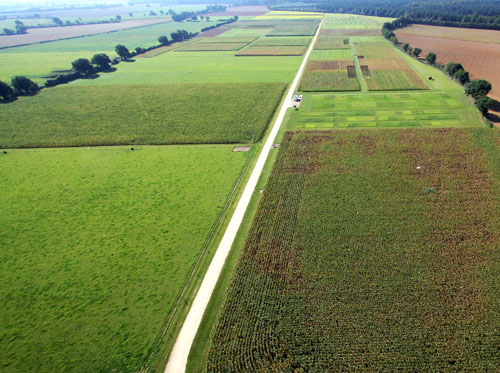 TA User (visit): Jack Faber, Alterra, Wagneningen University, The Netherlands; Paul Henning Krogh, Aarhus University, Denmark ; Peter Jorgensen, PJ-Bluetech ApS, Denmark (June, 2013 – 2 days).
Project Description: To further our understanding of the relationship between soil biodiversity and the functioning of soils, and how soil management may affect soil functioning in terms of provision of ecosystem services such as water infiltration and drought resistance. The ACBB field site provides excellent opportunities to compare various intensities of arable and grassland rotation management strategies as to the functioning of soils with respect to nutrient cycling, organic matter maintenance, soil structure, and hydrological regulation.
The results of various studies performed by the partners participating in the workshop need to be exchanged and discussed, so that our common understanding of the relationships between soil biodiversity and ecosystem services can be expanded.
We will discuss the need for further studies on site, and elaborate a workplan.
We will discuss possibilities for common publications.

TA User (visit): Marco Panettieri, IRNAS-CSIC Spain (June, 2014 - 30 days).
Project Description: Dr. Marco Panettieri, postdoctoral researcher at the “Institute of Natural Resources and agrobiology of Seville (IRNAS-CSIC)” together with Dr. Marie-France Dignac and Dr. Cornelia Rumpel of the “Institute for Ecology and Environmental Sciences of Paris (iEES-Paris)” are willing to establish a collaboration among them to evaluate the feasibility of a project focused on the study of the storage/degradation cycles of soil organic matter using high resolution spectrometric techniques.
The definition of “molecular recalcitrance” has been outdated by recent researches on the role played by organo-mineral interactions and microbial communities in SOM storage. The main goal of this project is to unveil how organic compounds interact with soil matrix promoting their preservation. To reach this objective, soil samples will be collected from the SOERE ACBB site Lusignan, in which a C3 to C4 plants conversion (prairie to maize cropping) has been established, and then analysed by high resolution techniques of spectrometry (GC/MS, GC/C-IRMS, CP MAS and HR MAS 13C NMR) and cutting-edge isolation methods. Samples will be taken from topsoil and subsoil, in order to distinguish from above and belowground biomass, and successively fractionated by sieving into aggregate size fractions, and by density separation into particulate organic matter fractions.
The applicant will travel to the iEES-Paris in three different periods of 10 days. During the first stay, scheduled from the 20th to the 29th of June 2014, Dr. Marco Panettieri will participate in the samples collection and preparation procedures. During the second stay, scheduled from the 10th to the 19th of July 2014, the protocols for the samples fractionation will be implemented into the iEES-Paris. The third stay, scheduled from the 8th to the 17th of September 2014 will be focused on the optimizing of mass spectrometry and nuclear magnetic resonance techniques for the analyses of the fractions of the sampled soil. The results will be used for the developing of future research projects.
See his feedback

ExpeER TA Site: with Tetto Frati, Italy.
TA User (visit): Andreas Pacholski, Crop Science, Kiel University, Germany (November, 2013 – 21 days).
Project Description: Livestock production contributes 70-80% of the anthropogenic ammonia (NH3) emissions in Europe and application of manure contributes a large proportion of these losses. Many cost-effective abatement techniques have been proposed to reduce NH3 volatilization in relation with manure spreading. However, common local manure utilization techniques need further investigation to promote best agronomic practices that reduce NH3 volatilization.
Objectives: The first objective is the in-field quantification of NH3 emissions from farmyard manure and cattle slurry applications on soil with and without maize residues, as they represent the most interesting treatments of the main experimental site for this issue. A second objective is a comparison among different methods for NH3 emissions investigation.
Materials and Methods: in field NH3 emissions will be measured for 3 days after surface application of cattle slurry, farmyard manure and for 2 weeks after application of urea on bare soil with and without maize residues (six treatments as total, with three replications).
Measurements shall be done according to a new multi-plot method developed in Germany (Gericke et al. 2011). Comparisons between treatments and replicate measurements are done by semi-quantitative sampling with acid traps. The obtained values are scaled to absolute losses by measurements with a calibrated chamber method (Pacholski et al. 2006). This approach has been proven valid compared to micrometeorological standard methods in several field trials in Germany (Quakernack et al. 2012, Ni et al. 2012). At some measurement campaigns micrometeorological measurements (Sommer et al. 2005) will be done to test the validity of the multi-plot approach under conditions of Northern Italy.