ECOSYSTEM TYPE: Spruce and spruce-beech forests in karst catchment. - Where?

FACILITIES: The Zöbelboden was esta-blished in 1992 as the only Integrated Monitoring station in Austria under the UN Convention on long-range transboundary air pollution (CLRTAP).
In 2006, it became part of LTER Austria. It covers a small forested catchment (90ha) of a karstic mountain range (500 to 950m above sea level) in the Kalkalpen national park. The Zöbelboden represents one of the best known karst catchments in Europe with long-term data series of the major components of its ecosystems. Sampling of chemical speci-mens is done by local staff. Chemical analyses are carried out by the laboratory of the Umweltbundesamt in Vienna. All data and metadata from monitoring and research projects are stored in a semantically structured database.
Recent developments at the site include:

CONTACT: T. DIRNBOECK (This email address is being protected from spambots. You need JavaScript enabled to view it.) 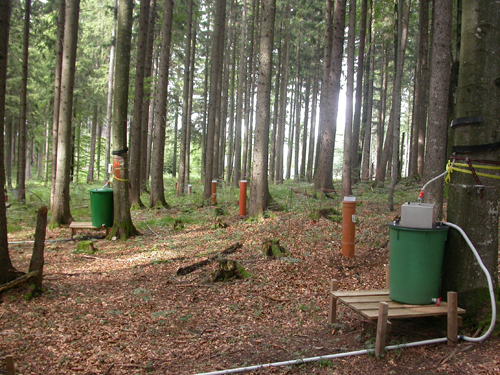 Development of a regional hydrological and biogeochemical model

TA User (visit): Andreas Hartmann, University of Freiburg, Institute for Geo- and Environmental Natural Sciences, Germany (March, 2015 – 05 days)
Project Description: In past studies at the LTER Zöbelboden, Dr Hartmann and the local team of researchers developed and applied simulation tools to simulate and predict the hydrological and biogeochemical behvior of the test site (Hartmann et al., 2010, 2012, 2015). As it is regarded to be representative for its region (National Park “Kalkalpen”) it is now time upscale the information gained from the long-term monitoring at the LTER Zöbelboden site to apply the model on a regional scale, which is crucial for understanding the measured impact on larger scales. Regional simulations and predictions of water availability and its quality will facilitate the present and future water and ecosystem management of this valuable nature reserve.

TA User (visit): Tiziana Di Lorenzo, Institute of Ecosystem Study, CNR - National Research Council of Italy (February, 2015 – 05 days)
Project Description: The subterranean environment harbours a unique fauna of unexpectedly high diversity.Thousands of species have been described from shallow and deep aquifers, hyporheic zones of streams and rivers, springs, caves and saturated zone of karst. Groundwater organisms (stygobionts) have long fascinated biologists because of its adaptation to the extreme conditions of ground water, such as their convergent morphology, loss of pygments and eyes, and the elaboration of extraoptic sensory structures. Groundwater communities are known to encompass most of the major taxonomic groups encountered in surface water habitats. Stygobionts exhibit a high degree of endemism and ecological specialization and are known today to be widespread, occurring in nearly all groundwater environments and throughout the world. However, information on their geographic coverage is still patchy and the biodiversity of this environment remains poorly known compared to that of freshwater surface habitats. Several aspects of the study of groundwater fauna create special difficulties, mainly related to the restricted access to the subterranean environments, such as karst systems. Many karst aquifers are often physically inaccesible due to the lack of extensive cave systems. However, collecting groundwater fauna at the outlets (springs) of a karst systems has proved to be a useful method to investigate the karst community and its biodiversity.
Groundwater species show different aptitude to dispersal, depending on their intrinsic expansionistic behavior, on micro-habitat location and species-specific dispersal capabilities and habitat preferences. Collecting groundwater drift at karst outlets such as spring has proved to give information about groundwater community dynamics, habitat partitioning and ecological preferences.
The aim of this project is to enhance the level of information about groundwater diversity and its dynamics through sampling groundwater drifts at the main outlets of a karst system. The Zöbelboden represents one of the best known karst catchment in Europe with long-term data series of the major components of its ecosystems. Moreover, sampling of chemical specimens is done by local staff at the main spring on a weekly base and through irregular sampling at all other springs. The project objectives are to integrate the chemical analysis by performing a preliminary biological sampling survey at the springs of Zöbelboden kasrt site, in order to collect the faunal drift. The results of the preliminary sampling will provide the first information of groundwater biodiversity at Zöbelboden site. Furthermore, based on these results, a regular sampling scheme could be proposed for further investigation aimed at assessing groundwater community dynamics and the ecological preferences of its species.

TA User (visit): Andreas Hartmann, Univeristy of Freiburg, Institute for Geo- and Environmental Natural Sciences, Germany (May, 2013 – 10 days).
Project Description: Due to the strong hydraulic heterogeneity of karst systems the simulation of their rainfall-runoff relationship provides a special challenge for model developers. In most karst regions, hydrologic and hydrogeological characteristics and spatial information about groundwater dynamics are extremely limited. The karst catchment “LTER Zöbelboden” in Austria provides excellent long-term data for model development and evaluation. The system is drained by several springs with strongly varying hydrological behavior that drain from the slopes or directly to the surrounding streams. To cope with this particular challenge, a model was developed that provides simultaneously the discharge of two surrounding stream sections and at two observation weirs within the system. To improve the degree of process representation, transport routines within the model are used to produce time series of hydrochemical compounds that are compared with the observations in addition to the discharge observations. That way, the uncertainty going along with the simulation of karst systems can be reduced. Additionally, it enables the model to provide solute balances at daily, monthly or annual time scales for the simulation period, as well as for future scenarios.