FACILITIES: The infrastructure consists of three intensive test sites (ITS): Wüstebach (ITS1), Rollesbroich (ITS2) and Selhausen (ITS3).
The infrastructures are operated by IBG-3 permanently since 2007. The sites are equipped with wireless soil moisture networks, groundwater monitoring, runoff and solute monitoring stations, eddy covariance tower (CO2, NO2, CH4), soil respiration monito-ring, climate stations with rainscanner (only Wüstebach) and lysimeter/deposition stations. A deforestation experiment (approx. 12ha) was done in Wüstebach in 2013. The Selhausen ITS is also equipped with geophysical and remote sensing monitoring systems. Within the observatory, a climate feedback experiment (SoilCan) using a lysimeter network was finished in 2012.
Recent developments of the site includes:

CONTACT: H. BOGENA (This email address is being protected from spambots. You need JavaScript enabled to view it.) 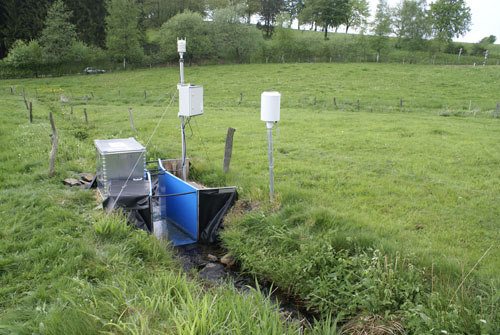 Radiative properties of organic-rich soils at the microwave L-band.

TA User (visit): Simone Bircher, University of Copenhagen, Denmark (September, 2013 – 2 weeks).
Project Description: Due to above-average rising temperatures a large amount of the frozen carbon sinks in the higher northern latitudes might be released, possibly causing a significant positive feedback on global warming. Thus, there is a strong need to monitor hydrologic processes, and given the hindered accessibility of these hostile environments, satellite observations constitute an essential tool. The Soil Moisture and Ocean Salinity (SMOS) mission carries the first space-borne passive L-band microwave radiometer operating at 1.4 GHz that is the preferred frequency for soil moisture retrieval. The latter is achieved by minimizing a cost function expressing the difference between brightness temperatures (TB) acquired by SMOS and modeled TBs by means of a radiative transfer model. The empirically-based model uses several land cover-dependent tuning parameters, which exclusively stem from study sites in dry and temperate climate zones. In order to improve our understanding of microwave L-band emissions in high-latitude environments and thus, supporting the quality of SMOS retrievals over these regions, the research project SMOSHiLat has been evoked in the framework of ESA’s Changing Earth Science Network. A database is created from data collected at the Sodankylä site of the Finish Meteorological Institute (FMI) in Northern Finland as well as at the Danish SMOS validation site established in the Skjern River Catchment in the framework of the Hydrological ObsErvatory (HOBE), including modeled as well as observed L-band radiative properties and state parameters. Using this information, an adapted emission model is developed and tested in the SMOS soil moisture prototype retrieval algorithm. The data sets of both test sites include continuous in situ soil moisture and soil temperature recordings as well as simultaneous tower-based (Finland) and airborne (Denmark) L-band radiometer TB measurements. Measurements of dielectric constants at L-band frequencies are carried out at the Laboratoire de l'Intégration du Matériau au Système (IMS) in Bordeaux, France. Even if situated less far north, the typical high-latitude environmental conditions including boreal forest, heathland and mineral soils with pronounced moss/lichen and decomposed organic litter layers on top are also encountered in Denmark.
The well-equipped L-band radiometer setup at the ExpeER site TERENO at the Research Center Jülich in Selhausen, Germany, offers highly controlled data acquisitions. By making use of this facility, the currently missing high-resolution TB data could be created for the Danish site spanning the entire range of encountered wetness conditions in order to complement the snapshot-like, km-scale airborne data. Thus, in the framework of the SMOSHiLat activities we would like to propose the following experiment at the Jülich site: Ground material excavated from the HOBE site, including the moss/lichen, organic and mineral surface layers is laid out in the 2 m × 2 m observation area of the L-band radiometer. The ground is completely wetted and subsequently shielded from natural precipitation. TBs are then acquired over an entire dry-down cycle accompanied by recordings of the essential state parameters (e.g. water content, temperature, soil properties). Furthermore, the experiment can be repeated for the individual layers. This activity would be of great value for the SMOSHiLat project as the development of the emission model could thus be based on more reliable experimental datasets from two different sites. For this reason, the proposed experiment would be highly supportive for the work towards improved understanding of the L-band emissions of high-latitude ecosystems, and the urgently needed high quality satellite monitoring.

TA User (visit): Stefanie von Bueren, Massey University, New Zealand (August, 2013 – 26 days).
Project Description: In February 2013 a COST Action ES0903 supported scientific mission in collaboration with Andreas Burkart from the science centre in Juelich was successfully accomplished in New Zealand. Field experiments focusing on sensor intercalibration of multispectral and hyperspectral sensors on board of Unmanned Aerial Vehicles (UAV) were conducted over pasture paddocks. Results show that UAV mounted sensors deliver spectral information with high spatial and spectral accuracy. Furthermore, an initial experiment to estimate vegetation biophysical parameters such as biomass and quality parameters has been conducted and results indicate the feasibility of using UAV based remote sensors for fast and efficient derivation of such parameters. With the proven feasibility of this new technology, it is now essential to extend the field experiments over different grasslands and croplands during Northern hemispherical summer to build up a solid database for biophysical parameter extraction. The goal is to use the same sensor and UAV configurations as in New Zealand and conduct extensive field sampling of variable grass and crop fields. Hyperspectral sensors such as the ASD FieldSpec Pro as well as targeted vegetation sampling will be used for reference.
UAV can immensely improve our understanding of vegetation dynamics and support the calibration of air- and space borne remote sensing products. This work is seen as an opportunity to work at the head of the fast emerging applications of UAV for scientific research and it is expected that results will be communicated to the scientific community via publications and presentations.
See her feedback