FACILITIES: The Hesse site is a beech forest plot equipped since 1996 with an eddy covariance system to measure continuously (half-hourly) the net fluxes of CO2, H2O and energy exchanged between ecosystem and atmosphere. Supplementary sensors provide the main meteorological data (temperature, humidity, radiation) and edaphic status (soil water content, soil temp.). Additional field campaigns give information about ecosystem characteristics evolution (Leaf Area Index, tree growth, fine roots biomass), carbon allocation to ecosystem compartments (soil and stem CO2 efflux, heterotrophic respira-tion) and their isotopic signature (13C).
The scientific infrastructure of the Hesse site was renewed during the winter 2012-2013 in order to join the ICOS network (Integrated Carbon Observatory System) and obtain the upper level label (ICOS level 1). This site improvement includes first the construction of a new 35m height tower overhanging the forest canopy on which a new set of eddy covariance and meteorological sensors have been installed; secondly a new set of pedo-climatic sensors with more instruments to better represent of the spatial variability of the soil characteristics. The complete system will provide measurements with a higher accuracy and reliability. Regular leaf, wood, soil and soil water sampling will be performed (several times per year) to measure carbon, nitrogen and mean nutriment concentrations and to archive organic matter for future studies.

CONTACT: B. LONGDOZ (This email address is being protected from spambots. You need JavaScript enabled to view it.) 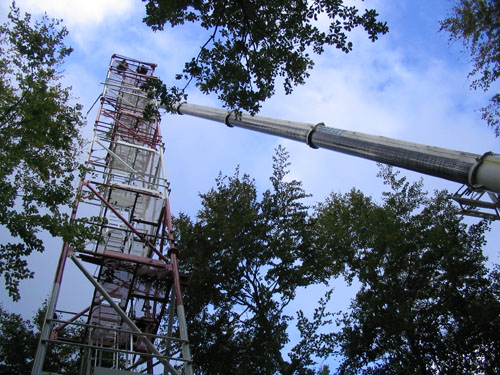 TA User (visit): Jan Pisek, Tartu Observatory, Toravere, Estonia  (July/August, 2014 - 5 days).
Project Description: Leaf inclination angle distribution is a key parameter in determining the transmission and reflection of radiation by vegetation canopies. It has been previously observed that leaf inclination angle might change gradually from more vertical in the upper canopy and in high light habitats to more horizontal in the lower canopy and in low light habitats (McMillen and McClendon, 1979). Despite its importance, relatively few measurements on actual leaf angle distributions have been reported for different tree species. Importantly, when inverting canopy transmittance measurements for estimating the leaf area index or foliage clumping, incorrect assumptions on leaf angles may lead to considerable errors (Pisek et al., 2013).
The objective of this project is to collect vertical profiles of leaf angle inclination distribution for boradleaf tree species occuring at the Hesse site, France (i.e. European beech (F. sylvatica), horn-beam (C. betulus), oak (Q. robur), goat willow (S. capreae), silver birch (B. pendula), aspen (P. tremula) and wild cherry (Pr. avium). The obtained vertical profiles will be used to examine if the often assumed spherical leaf angle distribution is indeed a valid assumption for given broadleaf tree species in temperate ecoclimatic region. Next, the leaf angle inclination distributions from Hesse site will be compared with previously obtained profiles for co-occuring measured tree species (B. pendula, P. tremula) from Estonia in hemi-boreal ecoclimatic region to see if there might be any changes in leaf inclination angle distribution profiles with latitude. Effect of wind on changes in the leaf inclination angle distribution will be possibly also quantified. The results can be also used as an input for improved modeling of local carbon and energy fluxes.

ExpeER TA Site: with Hyytiala, FINLAND.
TA User (visit): Markus Herndl, AREC Raumberg-Gumpenstein, Austria (February, 2013).
Project Description: The role of soil CO2 efflux from ecosystems in the terrestrial carbon cycle and its feedbacks to climate change is well known and there are several scientific efforts to characterize and quantify soil respiration across different environments. For ecosystems such as forests there exist a lot of studies, but comparatively little is known for agricultural systems such as cultivated grassland. In the Expeer project, knowledge regarding measuring and modeling CO2 efflux across Europe will be bundled and cross-linked. Moreover, the determination of soil CO2 produced in the different horizons by respiration from efflux data needs the measurement of soil CO2 storage. At the Hesse and Hyytialla sites there are continuous measurements of CO2 in soil pore space to quantify soil CO2 storage using Membrane Tube Technique. Also on both sites expertise is consisting about using and developing the soil CO2 gradient method. The main aim of the of the project MMCO2 is, to acquire site specific knowledge of modeling with the soil CO2 gradient method and the method of measuring CO2 in soil pore space. In the course of the project the two site approaches will be compared and the essential regarding technique and scientific methods transferred to grassland based system. The findings of the project will be used to establish a facility to measure and model CO2 efflux from cultivated grassland in Austria. The expertise exchange can help cross-linking systems and approaches from ecosystem science to application in agricultural sciences.
See his feedback