FACILITIES: The mature mountain forest in the western limestone Alps serves as a long-term monitoring site for biogeo-chemical pools and fluxes. It was upgraded to a climate manipulation site in 2004. Soil is warmed by 4°C compared to ambient during the growing season. Soil gas exchange is measured manually as well as fully auto-matically at high temporal resolution.In 2008, three temporary roofs (100m2 each) were installed to simulate summer drought. New plots were established (warmed and control beneath roofs). The basic roof construction remains on site; plastic roofs can be assembled any time except winter. Trenched plots (roots cut) allow permanent estimation of autotrophic and heterotrophic soil respiration. Site access is possible year round. Winter measurements of gas transport through snow are made.
Since the start of ExpeER, warming effects on root and mycorrhizal dynamics have become a major focus at the Achenkirch field site. These often understudied processes were  intensively investigated within two TA-projects in cooperation with Werner Borken from the University of Bayreuth and Ivika Ostonen from the University of Tartu. Root biomass and turnover were assessed as well as root morphology and fungal colonisation. Additionally, a newly established coope-ration with Douglas Godbold from the University of Life Sciences (BOKU) will provide deeper insights into warming effects on micorrhizal turnover.

CONTACT: A. SCHINDLBACHER (This email address is being protected from spambots. You need JavaScript enabled to view it.) 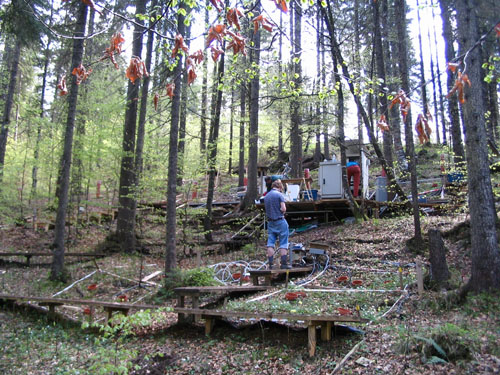 ExpeER TA Site: Achenkirch, Austria.
TA User (visit): Ivika Ostonen, University of Helsinki, Finland (August, 2013 – 25 days).
Project Description: Ongoing climate change increases the temperature in forest soils and thereby affects soil carbon and nutrient dynamics. The development of an efficient fine root system is necessary for trees to ensure sufficient nutrient uptake in changing soil conditions. Thus, trees must acclimate by modifying the morphology of short roots with primary structure, which are mainly colonized by ectomycorrhizal (EcM) fungi and responsible for water and nutrient uptake. Morphological plasticity of ECM short roots is the fastest mechanism for root acclimation in trees, which enables them to survive in a changing environment. We aim to study changes in EcM short root morphology in relation to higher soil temperature and the experimental site at Achenkirch provides a great opportunity to assess potential warming effects on EcM short roots of mature spruce trees. The analysis of the results will give valuable information on general tendencies in acclimation of nutrient absorbing EcM short roots to warmer soil conditions. Shifts in short root morphology may influence the functional dynamics of tree fine root system, its associated mycorrhizae and the rhizosphere, and play a key role in C allocation and nutrient cycles of forests in the future.

ExpeER TA Site: Achenkirch, Austria.
TA User (visit): Werner Borken, University of Bayreuth, Germany (May, 2013 – 25 days).
Project Description: Previous studies on soil warming revealed a severe increase in soil respiration which is linked through mineralization of soil organic matter to the soil N cycle. Consequently, we hypothesize an increase in soil nitrogen turnover as a result of soil warming. The study site Achenkirch (Austria) provides an excellent basis to study the long-term effects of soil warming in a temperate mixed forest of the Alps. The doctoral student, Marianne Schütt, shall measure the in-situ gross N turnover (ammonification and nitrification) in the top soil of the warmed (+4°C) and untreated control plots using the 15N pool dilution technique. After sampling, soil cores will be immediately treated with 15N labeled ammonium or nitrate solutions for 24 hours and then extracted with KCl solution. The extracts will be analyzed for ammonium and nitrate concentrations and the respective 15N signatures. Based on these analyses, gross and net turnover rates of nitrogen will be calculated for the warmed and control plots. In-situ gross N turnover rates will be repeatedly determined in August of 2013 because of seasonal dynamics. Results of this study may help to predict the availability of soil N in warmed soils and the potential N limitation of tree growth.

TA User (visit): Werner Borken, University of Bayreuth, GERMANY (October, 2012).
Project Description: Effects of soil warming on fine root turnover in a spruce-beech forest. Turnover and mortality of fine roots may be enhanced in the warming plots while the stock of fine root biomass may be not affected. In the short-term, most warming studies suggest increasing turnover rates and mortality of fine roots, but the results are often somewhat contradicting because of applied methods or interacting factors like the availability of inorganic N. Our knowledge on the long-term adaptation of fine root systems of Norway spruce and European beech to soil warming is scarce.
Seasonal patterns of fine root biomass and necromass, as well as fine root turnover, will be assessed by a combination of sequential coring and in-growth cores in the organic layer and top mineral soil. Additionally, the age of live fine roots will be measured using the radiocarbon signature of structural C components. These measures will provide information about the longevity of fine roots in different soil horizons under elevated soil temperature.