FACILITIES: The Rothamsted Long-term Experiments (LTEs) include sixteen field experiments. The Broadbalk Wheat Experi-ment and the Park Grass Continuous Hay Experiment are two of the most widely known. They were established in 1843 and 1856 respectively. Many of the Rothamsted LTEs were established to examine the effects of different manures and fertilisers on crop production, but have since become of increasing value for environmental and ecological research. In addition, the Rothamsted Sample Archive houses about 250 000 plant and soil samples and long-term data sets are kept in the Electronic Rothamsted Archive (eRA).
Recently, the Park Grass experiment has been identified as a Genomics Observatory because it is a site with a rich history of environmental/ecological data collection and a long-term commitment to future studies. Genomic observatories are being established to take the planet’s “biological pulse”. DNA sequences are becoming core components of Earth-monitoring systems, and data output is soaring from genomics and other observing technologies, but sequence data alone are of limited value without the context of time and location. The Park Grass soil metagenome from the untreated control plot 3d is now publically available.

CONTACT: A. MACDONALD (This email address is being protected from spambots. You need JavaScript enabled to view it.) 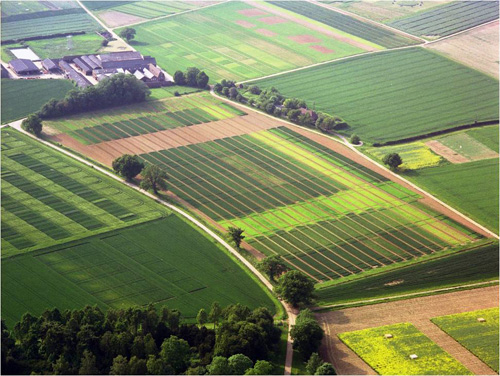 TA User (visit): Lars Juhl Munkhorn, Department of Agroecology, Research Centre Foulum, Aarhus University, Denmark (February, 2015 – 05 days)
Project Description: The samples will be used for Johannes Lund Jensen’s PhD project with the title “Identification of soil organic carbon thresholds for sustained soil functions in agroecosystems”, and hopefully the bigger recently applied research project “Critical levels of soil organic Carbon for sustained soil functioning of arable soils (CritiCarb)”. The research aims at determining critically low levels of inherent soil content of carbon and improving our knowledge on added organic carbon for the purpose of restoring or sustaining soil structure. This is done by focusing on the ratio between mineral fines (<20µm) and soil organic carbon. We expect that this ratio identifies a functional threshold for soil physical behaviour as well as decomposability by microbes of labile organic matter.
We want to perform the research at the selected site because there is a broad gradient in soil organic carbon due to contrasting long-term land use. We plan to sample in plots with different long (>50 years) and short-term managements (AA, GG, AG, FG, GF, long-term fallow and arable). This will give us a gradient from the bare fallow treatment, which is highly degraded to the reseeded grass treatment, which is highly saturated in soil organic carbon.
Hypotheses: 1. The ratio between mineral fines (<20μm) and soil organic carbon can be used as an indicator of critical low soil organic carbon content for soil physical properties. 2. The ratio between mineral fines and soil organic carbon has an impact on the turnover of organic matter and hence the release of relevant nutrients for plant growth. 3. Addition of organic matter (flow) may restore soils with poor physical properties caused by unsaturation with organic carbon (low C stock).

Carbon and water relations of grassland ecosystems at Park Grass.

TA User (visit): Hans Schnyder, TU München, GERMANY (February, 2012).
Project Description: Carbon uptake and water loss of plants are controlled by the regulation of carbon assimilation rate (A) and stomatal conductance (gs). Any changes in these parameters under rising atmospheric CO2 influence plant water-use efficiency and can affect global carbon and water cycles. Thus, a better understanding of the A and gs response by plants to rising atmospheric CO2 in terrestrial ecosystems is important to help predict future atmospheric CO2 levels and the consequences for climate change. Long-term responses of plants to rising CO2 during the last century can be studied retrospectively by means of stable isotope analysis. Such studies have been successfully conducted on trees, but little is known about herbaceous vegetation, due to the lack of appropriate samples. The short-term CO2 response of A and gs has been shown to depend on the availability of nutrients and on the responsiveness of different plant functional groups. The Park Grass Experiment (PGE) is a unique resource to test this response at the long-term ecosystem level. The PGE comprises various fertilizer treatments with different amounts of nitrogen, phosphorus and potassium on old, established semi-natural grassland. Archived hay and herbage samples are available for each year and every fertilizer treatment since establishment of the experiment in 1856. We have already analyzed stable carbon isotope discrimination (13Δ) of vegetation samples from the control plot 3d and have shown that intrinsic water-use efficiency (Wi) of nutrient-poor temperate grasslands has indeed increased since 1857 (Köhler et al. 2010). Recently, more herbage samples were analyzed to determine whether the long-term trends in Wi differed between grassland plant communities with different nutrient supply (Köhler et al. 2012, in preparation). Now, we would like to analyze herbage from treatments which have received ammonium sulphate fertilizer, to verify if ecosystems receiving NO3- or NH4+ fertilizers differ in their Wi response (treatments with sodium nitrate have already been sampled). As it is possible that soil pH effects (e.g. via its effect on botanical composition) may interact with nutrient effects, we propose to analyze herbage from subplots with differing soil pH to compare changes in 13Δ within each fertilizer treatment.

TA User (visit): Michael Herbst (May, 2012).
Project Description: Soil organic carbon pools play an important role for the understanding and the predictive modelling of heterotrophic respiration. One of the major issues concerning model carbon pools is their purely conceptual definition. They are just defined by a turnover rate. Despite some attempts to link the conceptual model pools to measurable SOC fractions, this challenge basically remains unsolved. In this study we introduce an empirical approach to link the model pools of RothC with measured particulate organic matter fractions and an inert carbon fraction.
See his feedback

TA User (visit): Kristof Van Oost, Earth & Life Institute / Earth & Climate Research Centre (TECLIM ), Belgium (April, 2013 – 10 days).
Project Description: Modelling and monitoring changes of phosphorus and soil organic carbon in long-term field experiments.
- Objectives: 1) To develop a flexible and robust model for describing and predicting tillage-induced soil and soil constituent (P, SOC) redistribution over time in long-term experiments. 2) To test a spectroscopic method for quantifying gradients in SOC across experimental plots using a low-cost unmanned aerial vehicle (UAV).
- Background: Tillage has been shown to cause considerable dispersion of soil and its constituents (e.g. Van Oost et al. 2000, Lane and McGrath, 1994, Sibbesen et al., 2000). This can have important implications for the integrity of long-term field experiments and the interpretation of treatment effects on the temporal change of soil properties, such as total P or SOC, in the plough layer. Depending on plot width and tillage intensity substantial amounts of the original soil will have left the plot area after 50 years. Van Oost et al. (2003) have developed a distributed model for predicting soil and soil constituent redistribution on sloping terrain. Here we propose to test this model for the well-documented management conditions of long-term experiments. With SOC contents dynamically changing in arable landscapes as a function of management, climate and topography, there is a need for developing low-cost methods for monitoring SOC contents in plough layers. Remote sensing methods based on multi-spectral images can map SOC variation (Stevens et al., 2009). Recently, the costs for UAVs and multi-spectral cameras have dropped dramatically opening an interesting perspective for flexible, local SOC mapping. With their pattern of distinct SOC contents in adjacent plots, long-term field experiments provide a very efficient experimental design/layout for systematically testing such a remote sensing approach for SOC.
- Plan: The Broadbalk experiment at Rothamsted is uniquely suited for this work. In 1990 total P in the plough layer was measured along a transect at high spatial resolution traversing several plots with contrasting soil P contents. Resampling this transect after a period of 23 years will (i) provide support for plot-to-plot movement in Rothamsted and (ii) provide unprecedented data to constrain and test a spatially explicit soil movement model. The advantage of this approach is that the initial conditions are well defined and that there are detailed records on fertilizer inputs, crop yields, P offtake and soil management. Additionally, Broadbalk provides the necessarily wide range of SOC for testing SOC sensing. In this project we plan to collect soil samples for TP and SOC analyses in selected parts of the Broadbalk long-term experiment. The soil data are used for model calibration and validation. We conduct aerial surveys of these areas with an UAV (low altitude c. 30-50m) and a multi-spectral camera testing an inexpensive spectroscopic method for mapping SOC. This work is collaboration between institutes from three countries and will require several field campaigns on Broadbalk starting spring 2013. Some of this research will be part of a PhD project.
Output: Aldana-Jague E., Goulding K., Hecktrath G., Macdonald A., Poulton P., Stevens A., Van Wesemael B., Van Oost K., 2014, High-resolution spatial patterns of Soil Organic Carbon content derived from low-altitude aerial multi-band imagery on the Broadbalk Wheat Experiment at Rothamsted, UK, EGU General Assembly Conference Abstracts 16, 12063.
See his feedback

Carbon and water relations of grassland ecosystems at Park Grass.